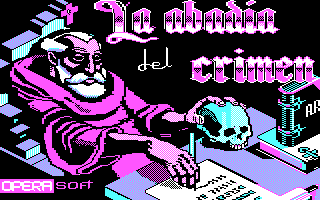 Between 1980 and 1990 Assembly was the most used language for everything, from videogames to nasty viruses or most of your everyday programs. After playing the game, reading and watching some technical details about La Abadía del Crímen (of which by the way there are two books about in Spanish: I & II), it's been mentioned multiple times that the original AMSTRAD CPC version was amazing technically, but that it wasn't easy to port because of the self-modifying code usages it contains.

As it sounds heretic as of today to think about patching in-memory code, I've read a bit about how it works, these scenarios being the most common ones:

Now, back in the day this made sense: Memory and CPU were so restricted, that performing an if frequently could really hurt your game, or keeping properly scoped functions with different logic pieces could mean extra precious cycles spent on pushing and popping registers from the stack [1]. But nowadays nobody would even think about something as simple as manually changing the instruction pointer (except trying to circumvent videogame protections, hacking videogame consoles and other shady areas). And even if you wanted, Data Execution Protection, memory pages protection, and the tons of caches between the code and it's real execution makes it a really bad idea to even try for anything normal.

But another point is that there are more modern ways to do something exactly the same as self-replicating code in videogames mostly try to do (avoiding conditionals):

I'd definitely go for function handlers if I were to build any non-trivial game today: it is clean and very friendly towards testing at both sides, as you can inject fake AIs, and test each one in isolation.

In the end you're just modifying a function pointer to have a different address, so it is really really similar to adding or changing a JMP assembly instruction. Plus nobody will get crazy trying to debug logic that has been patched in-memory and no longer resembles the source code.

Which other ways of avoiding conditionals and/or organizing your code to avoid huge switches do you know?

[1] : Actually, those anti-object orientation "patterns" would come back with J2ME, where hardware constraints once again favoured a non-Java approach of having a single class with as much inline code, global variables and few methods as possible.