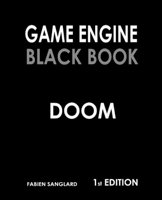 Second book from Fabien Sanglard analyzing the source code of another id Software hit, this time the awesome DOOM, released in 1993. Over more than 400 pages we get to learn about the 80486, NeXT workstations and in general hardware of those years, very relevant for the development and optimizations of the game. We of course get detailed explanations of the most relevant fragments of the source code (covering most of the engine), but an interesting newcomer for this book is a quite big section dedicated to the various console ports the game had and their "adventures".

It is amazing to learn how the 3D engine drawn based on the visplanes and the optimizations it had to do paint vertically, draw first the walls and then ceilings and floors, and multitude of internals that back then were never done before. It is also yet another example of how genius John Carmack is, when he designed a mostly multi-platform architecture so that only modifying 5 .c files the game would run on NeXT, MSDOS or other systems (today runs almost everywhere), abstracting all I/O, from VGA access to sound or input.

The following image is an example of the many diagrams (and interesting content) you will find inside, showcasing another topic I really liked: the artificial intelligence of the monsters and the "noise tricks" to simulate entity scripting. 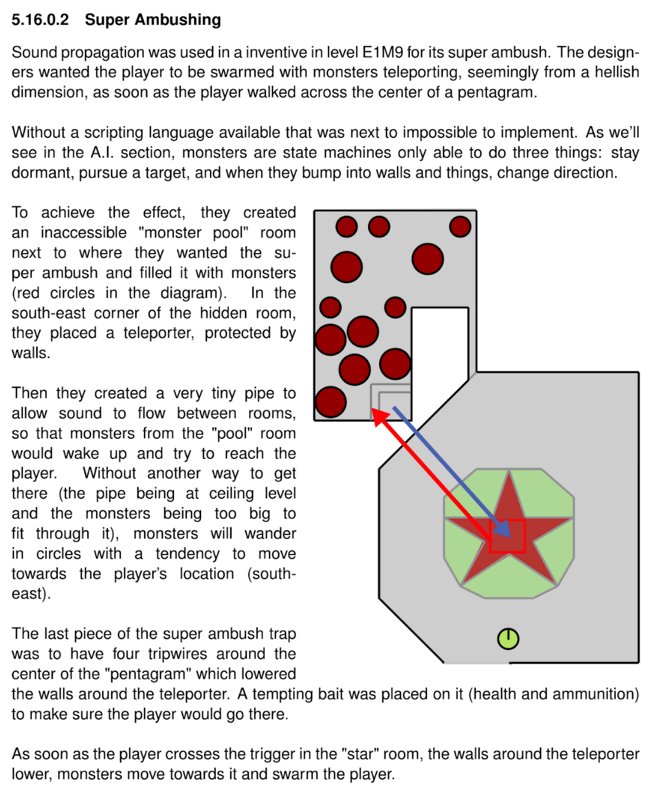 As a retro gamer, I loved the section of the different ports of the game to consoles, with greatly detailed intros of each platform's hardware to pave the road to why most of the ports were poor than "a simple PC". Specially incredible is the story behind the Super Nintendo / Super Famicon port with the SuperFX2 chipset and reverse engineered DOOM code and data. In general, rendering 1 pixel-wide columns for consoles which were great with 3D but had no proper texture perspective correction is another clever idea I wouldn't have imagined even possible.

If DOOM became an instant classic for you either when it came out (or when you were able to have it, as for example in Spain until DOOM II came out was impossible to obtain the first one without resorting to piracy), this book is a must have read. Some concepts won't be easy to digest at first but it is both a testament of technical advancements and a small compedium of achieving the impossible (some console ports).

After first Wolfenstein 3D and now DOOM, I can only hope now that the author has the strength to write the third book about my all-time favourite, Quake :)