In the late 80's my dad had a AMSTRAD PC/W green&black pc. On it I saw & played my first videogames (Pong, Space Invaders, Asteroids, Pac-Man, ...).

One day, someone told my father that there was something better, much better. A Commodore Amiga 500, an incredible 64 color computer, with floppy disks, 4 channel soundcard (wow! real sounds, no more beeps!), and a growing application and game pool. We bought onem and on it I played dozens if not hundreds of games... Maniac Mansion, Indy graphic adventures, Monkey Island (yeah, I'm a big LucasFilm/LucasArts fan) ...

Sometime in the early 90's I started messing with "game pokes", some rude semi-basic semi-assembly code you typed in order to get cheats for your games. It came in the videogame magazines (sometimes even in a floppy already typed). I wondered what was all that alien language, how could it affect the game.
So, I digged a bit and found there was something called AMOS (info and links), a tool to make videogames. I was so exited I bought it (It's still somewhere in my parents holidays house, with the still working Amiga computer) and started to mess with it.

It was like Div Games Studio or today's DarkBASIC. Basically an IDE, containing a code editor & compiler and a graphics editor (If I remember correctly, sounds could be used but no editing was available). 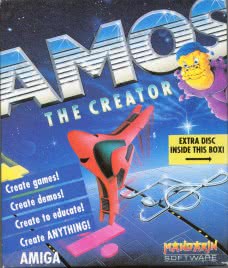 I didn't make any videogame (I was too young, maybe 11 or 12...) but I was able to modify the example ones, and even created some new GFX (I learned Deluxe Paint II - pixel powa!). And, most important, It opened me the doors to software development (first as a hobby, now as my job).

But my first steps programming in MS-DOS will be a subjet for another post. Let's just say that I owe one to the RIP game Company Westwood, for their Dune II videogame. It was my desire to make new levels or modify existing ones what made me learn binary, hexadecimal, a bit of Assembler and, lastly, C.