Today it's been just launched our first public WLA! Although really is the second one the first is in it's final touches with the customer, but we expect to have it ready quite soon too.

The agent's name is iZ@psoe.es and it has been made near one month and a half for the current spanish government by PedroA and me, targeted to the general elections that are taking place right now and will finish the 9th of march.

It has lots of functionalities related to the elections, like consulting the census, near 1300 government proposals, where do you have to vote, multimedia videos and MP3, a pack of custom emoticons, customized funny responses...

The Activity window is used a lot, for example to play the videos and flash animations: 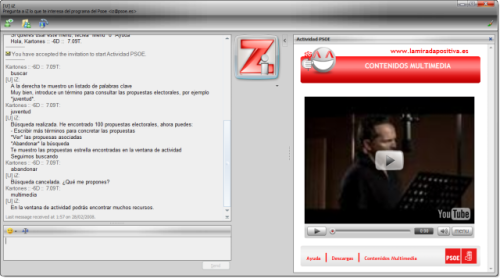 It has a Windows Live Maps mashup to show for example where do you have to vote after asking you some basic address parameters: 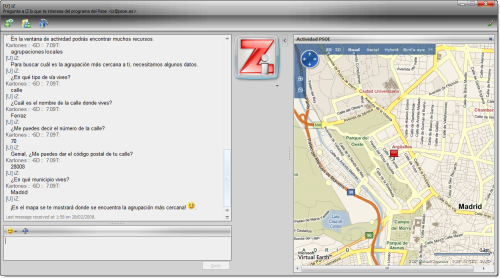 We've developed a big search engine to filter, query and ask for political proposals, being able to show key ones, refine your searches with more keywords, show related videos for some proposals... along with a tag cloud that contains the general keywords (there are 156 general keywords and hundreds of synonims to ease the searchs).

We didn't wanted to force the user into searching by default, so the agent shows some information in a menu when saluted, and lets the user do something, or just chit-chat with the agent for a while (after some chatting it will remind the user it's main function, speaking about the political proposals).

Once you start either using the search engine or the other options, you are "driven" through the steps until either you cancel or finish. In the search, you start entering keywords and synonims to refine your search "query"; if key proposals are found, they are automatically loaded in the Activity Window while you keep searching; When you've finally found just one proposal, or you want to see your current search results, it is loaded too at the AW.

Initial feedback from some users says that some people do not read the help and they think they can search from the very beginning (it is triggered with patterns like "search" or "proposals"), so maybe we should have either forced an initial search, or made a smaller initial help command so that more users noticed how the search is activated.

It's been a quite intensive development because we had a great release date deadline limitation, and we had to deal with challenges like XML file cachings and quite complex data transformations and manipulations (we used SQL Server 2005 DTS and two custom .NET Applications to import data, transform and manipulate it and export it to our desired destinations).

Official info about the agent can be found here (in spanish).

It is the first WORKING Agent in Spain. Another one was made before, but was removed due to both technical and content problems.

It is a titanic work for two people and while it might not be perfect, we're really proud of the amount of work done in so few time... We've had also a lot of fun during the development, and customer feedback and agent testing has been very useful to improve the recognized patterns.

Enjoy it and if you want, leave a comment telling what you think of the agent :)

Update: Added more info explaining how the search works and how it is triggered.