Receiving Linkedin invitations to connect is the most common action you do on the work-oriented social network. So frequent, that I know quite some people that simply pile up dozens, then hundreds of invitations, not wanting to accept them. The reason is usually the same: It's a recruiter that either didn't even sent a private message to introduce himself/herself, or that if they did... it smells like a template filled just with your name and as much as your current company name.

This is sad, because I really believe in the power of Linkedin as a source of good talent, but so much noise and flood of low (or no) effort recruiting attempts, sometimes even blind shooting (or worse, receiving similar messages from multiple people of the same company's HR department) just creates an ugly picture of the recruitment job. And while I also suffer them from time to time, I've also had pleasant experiences, both regarding job changes and just having good chats explaining my situation and reasoning to not wanting to switch job.

But there's also a part of me that is a bit paranoid regarding privacy, so since long ago I found what I think is the single most interesting privacy option at linkedin: Changing your connections list privacy to private. Or more especifically, changing it so your contacts will only see those of your connections that are shared, that they also have on their contact list. This is not only a good defense line to keep your contact lists private, but also a bit of a trolling mechanism for those lazy recruiters who don't do their homework: "sure, you want us to connect so you can try stealing or spamming my contact list? No problem, but there's a surprise waiting for you". It also is interesting if at your job you have some referal prizes, which can sound selfish but I've seen HR departments prey every employee Linkedin hunting for fresh meat, and then annoy some people from multiple sources almost at once.

This handy option can be found under Privacy & Settings: 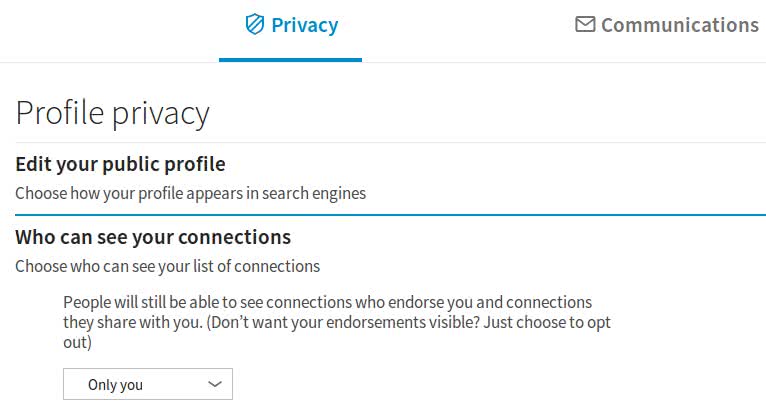 As I said, it is not always the case and there are good recruiters too (I've met a few), but the market is saturated with unprofessional people and this helps to keep them at bay, or at least frustrate their attempts of grabbing your connections.