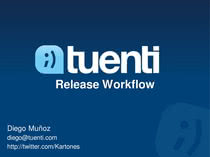 I do have some regarding organization, though. It was the first year in Spain, but celebrating it at a university was in general a failure:

I've been to a few events and most of this points are always covered by default (excepting talk length, which is either all monitored or none). A bigger place (cultural place, dedicated events building or even a huge tent) fixes most problems, so I hope that for future editions this gets fixed.

I have updated the contents of my talk at slides.kartones.net so if you missed it and are interested surf to the link to read it.