16th book reviewed, this time about how to build a social network with PHP. Relatively big book (540 pages) with tons of code.

The next one or next ones will probably be about Javascript as I seriously need to improve my skills. 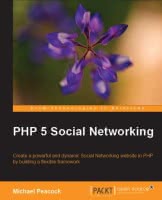 This book walks chapter by chapter about the process of building a social network, with a structure and features mostly grabbed from Facebook ones (friends, statuses, profiles, events and groups).

It is done from scratch using PHP5 & MySQL, with a custom built lightweight REST-like MVC and a basic templating system (looks like grabbed from PHPBB forums).

The author does a nice selection of design patterns to apply to the architecture, with clear and concise definitions of them, but then the code… starts to get messy.

That said, almost all the code is explained (sometimes even line by line), perfect for reading instead of paragraphs and then big chunks of code.

Has some mentions to CAPTCHA systems, importing contacts/friends from other networks, and other interesting features (but no actual code is provided).

In the later chapters, builds a proof of concept of a REST-like API, unversioned and tightly coupled with the website. The book then ends with a quick pass about some pretty basic hosting, SEO, monetization and growth/scaling.

The code can be more or less easily ported to other languages, and the foundations are not bad for a typical low-scale web project, but if you plan for a medium size, you will need to do some serious refactoring and cleaning to the code.

Not bad for beggining into the social networks development segment, but if you have experience on them this book will be too basic and without any advanced technique.