I don't even remember since when I had this 2001 book, only that I bought it second hand because I read it was really interesting and procedural generation of content is something that always has intrigued me. Not having found a digital version or scan anywhere, I decided to read it in paper before gifting it to somebody.

It's a ~300 pages hardcover book with a CD-ROM, which sadly was in such bad shape I couldn't read it, although I'm probably not going to miss the source codes as I've been able to code my versions of some algorithms and examples.

As the title hints, most of the book is about procedural generation of content for videogame universes. No matter if we're talking about planet or character names, lore texts, polygonal trees, complex shapes like a human face or a full universe composed of galaxies, stars and planets, we're taught multiple techniques to generate random numbers and, most important, sequences of those numbers. We're also explained how controlling the values of the numbers is as important as at least knowing that any non-purely random algorithm will tend to reach a pattern, where numbers will start repeating. Combined with statistics, probability and different algorithms, we'll learn to generate content for our games and even improve the storage of the data (e.g. we're explained how the RLE compression algorithm works), and what makes fractals interesting for pseudo-random number generators.

In general the book is well explained, detailed and with abundant examples, some carried over through multiple chapters, up to the point that a few chapters contain almost no theory and instead two or three applications of the topic with the examples (images included). I like it because it helps consolidate what you're learning, but at the same time you can skip a few pages if you already understood it. A big chunk of the examples encompass adjacency tables (via words), line-art (via tree behaviour) and (coordinate systems (via images) as sources of data. Also the final block of chapters are a "full" example of a space exploration game, applying a few of the concepts explained before. It really doesn't apply everything (at least in the book, maybe the source code did) but still makes up for a decent example of object serial numbers and seeding.

Not having the original source code CD I had to reimplement in Python (instead of the book's C) some of the formulas and found a typo or two (my book it's a 1st edition), but where pretty simple to correct.

While most of the contents are clear to understand, a few of the examples are not very detailed and confusing on how to achieve them; for example, after talking about affine transformations we see some formulas and an image of a generated fern plant. We see two formulas and a table of affine transformation values, but no clue of how do you actually paint it, because the description of how the affine transformations are applied is incomplete. In the end it is just explaining Barnsley Fern fractals but a) curiously without giving the exact name and b) not properly explaining the formula and steps, just throwing a bunch of formulas and values and saying "if you input this and feed last values arrive to this fern drawing". It feels nice to learn not only how they are drawn but why they are so cool, but I should have to go to Wikipedia when in theory I have a bunch of pages detailing it. 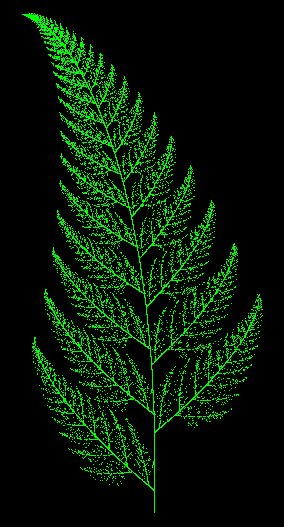 I felt that the whole block about fractals contains much theory and not so much practical use, feels a bit incomplete. Talks here and there about subjects but without almost any specific example, like "Pac-man ghosts can share same movement behaviour" (of course, but how does this relates with fractals?). We are indeed shown how to modify object adjacency tables with a Mandelbrot fractal, but I feel there are too many pages on the topic for such few applicable results.

Despite my small complaints, overall a great resource for learning the basics of procedural content generation, and it opened my mind of how important is choosing the data set and/or the algorithms, and that even "bad" things (like repeating patterns) can be controlled and put to good use.