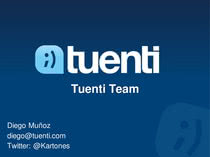 Last week I spent two days at the UPV (one of the two Universities that Valencia has), at a employment fair, both to give a 1 hour talk about how Tuenti and its technical teams work, and to do HR recruiting with students and graduates that came to our stand.

The talk itself (in Spanish) is available at my slides section (named "Tuenti Team") and has brief explanations of our structure (TL;DR: product teams and specialized teams).

Tuenti is a different company, we try to be as friendly as possible with everyone, so it's normal to see people happy to talk with us, satisfied with my talks (I am sincere and direct, do some jokes but specially I avoid "selling smoke"), but at this fair... we were directly the "odd ones".

Most, if not all software development related companies at the fair, except us, were looking for people for consulting services. And I mean every single one of them.

Some even directly telling that "you are going to be in charge of customer communications and some India software factory employees management", or "we only come here to recruit as many interns and possible".

Others were more discrete, trying to convince people that you can be an analyst without having to code first, that consulting "is the best way to go for a professional" (more on this later), and similar manipulations of a reality that, at least in Spain, is far from true.

I really got scared of the future that awaits current generation of students. With our study changes now students specialize their career from the third year, with some generic paths but others way too specialized (embedded systems) or directly frightening ones (a consulting path!).

I am not against specialized consulting, with good professionals it is perfect for many scenarios. But what I am against is about luring engineers into being analysts with intern salaries, about tricking them into thinking that you can do a good higher position job without any previous experience, like "I want to be a team lead" or "I want to be a functional analyst" when you really haven't coded anything except your lab assignments and you don't know how the real world works.

The university can't control it nor avoid it, is not their fault how the software segment works (mostly) now in Spain.
But I was so happy that we could offer somehing different: Working in in-house projects, no consulting, not lies about your real skills, a decent payroll, team work (instead of leaving you at the customer's offices), a professional career path... A decent and fair job at least.

Things might be darker with the crisis, but in software development we were rotten way before the crisis arrived. We need quality jobs with qualified people to not only pass that crisis, but also become good in what we do and avoid future monetary problems by being a reference taken into account.

Also, and unrelated with the event and my rants, the other night while I was waiting for a huge branch merge, I built a simple HTML and URL encoder/decoder.
Too many times I need to do quick tests or want to HTML encode a big chunk of text and I usually google, try first result, else go back, try next, etc., while building my own took 5 minutes and now I have it localized.

You can check it here, but (<self-advertisement>) I would recommend you instead to browse my Development Links List page, because I frequently update it and use it daily instead of browser-based bookmarks (</self-advertisement>).