As lately I'm quite busy between my pretty dog, working, reading articles (of too varied topics to write about them I think) and trying to rest, I've just written another book review I had pending since a while. It's another book about LEGO Mindstorms EV3 (of which I have sadly my Node.js library quite adbandoned). 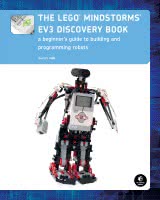 As the book reads, it is a beginner's guide. But we're talking of a 400 pages, full-color title, in which you'll learn indeed the vital sensors and block-based programming (aproximately the first 100 pages) but also some mechanical basics about beams, axles, gears... Which help a lot when you want to try yourself building something (instead of just following construction instructions).

Each type of block is detailed really good, usually with more than one sample program fragment and lots of pictures. You're also given many "design discovery" texts, which are optional steps you might take that come without instructions, just as hints or ideas of further playing.

As an example of the degree of detail, the chapter about gears teaches not only essentials but gear ratios, torques, frictions, worm gears, gear trains, bevel gears... including the underlaying mathematics behind it.

Also, the models that you get to build are really cool and far from simple: a Formula 1 car, an ant, a sketch drawing machine, a robotic arm that grabs objects and a walking and talking humanoid. All imaginative and varied and some really ingenious.

I'm really happy with the book. It looks very professional, explains many things and not only in detail but in depth. Definetly recommended.